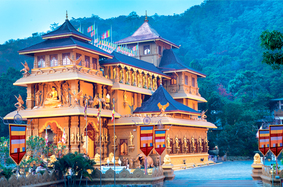 The Buddha Shrine at our headquarters in Sri Lanka
Here the Buddha’s teachings are presented in simple language and style that is easy for everyone to understand. The uniqueness of Mahanevnawa is the effort to bring the Supreme Dhamma to the devotees in its original form. Consequently, both young and old devotees listen to Dhamma and practice virtue, concentration and wisdom to realize the Four Noble Truths revealed by the Supreme Buddha. Presently there are more than 800 disciple monks, more than 75 disciple nuns, and thousands of lay disciples practicing Dhamma at Mahamevnawa Monasteries around the world. Currently there are more than 60 Sri Lankan and 25 international branches including in Canada, United States, England, Germany, Australia, India and Dubai. Within twelve years from the start of the monastery, Mahamevnawa became one of the leading Buddhist organizations spreading the teachings of the Buddha.

Grand Temple of The Gautama Buddha 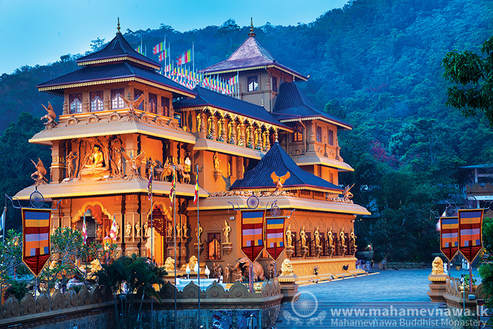 The Siri Gautama Sambuddharaja Maligawa (Grand Temple of The Gautama Buddha) is one of the most beautiful Buddhist temples in Sri Lanka. This magnificent temple was completed in 2012 to honor the Gautama Buddha and to commemorate the 2600th anniversary of his enlightenment. The temple was built with the meritorious intentions and guidance of most venerable Kiribathgoda Gnanananda Thero,the founder of the Mahamevnawa monastery. The statues, paintings, carvings and all other art works in the temple are original creations of highly skilled Sri Lankan artists, made exclusively for the Sambuddharaja Maligawa. As well, thousands of devotees connected to Mahamevnawa monasteries in Sri Lanka and abroad had extended their full financial and volunteer support. With the laying of the foundation stone, the construction work of the grand temple was started on 6th February 2011 and which was completed within one year and five months. On 2nd July 2012 the temple was offered to the Gautama Buddha during a grand opening ceremony and was made accessible to the public since then.
to find more information
To find more information about Mahamevnawa Buddhist Monastery please go to mahamevnawa.lk